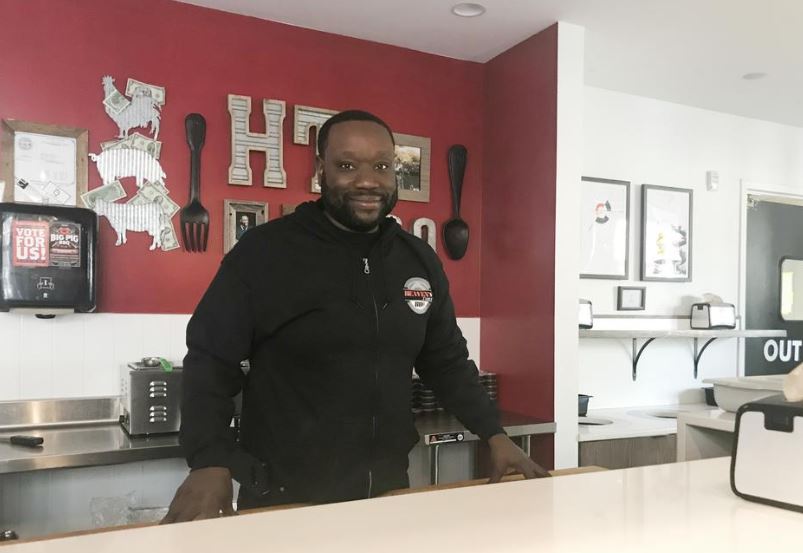 You can read the full article from Milwaukee Business Journal here.

The Milwaukee native thought the chicken was ready as soon as it turned golden brown. But when he served the dish, it bled.

“I was super disappointed, but my mom’s like, ‘It’s OK. You’ll get better,’” Alston said. “For me, I’m going to work at something until I perfect it. That’s always been my attitude. I perfected frying it.”

Today, Alston owns and operates a popular vendor stand called Heaven’s Table BBQ inside the Crossroads Collective food hall on the east side of Milwaukee. The business dishes up a menu of beef brisket, smoked chicken, sausage and pork shoulder, along with a roster of sides.

He said he has always been interested in cooking, recalling times as a child when he opted to watch people prepare food while other children played. His family hails from the southern region of the United States, Alston said, and he was brought up with their cooking traditions.

As a young adult, Alston said he worked as a tow truck driver but decided he needed a new career path. He attended Milwaukee Area Technical College for culinary school and also holds a business management degree from Cardinal Stritch University.

Alston’s career has included a range of jobs, such as educational assistant at MATC and positions with SURG Restaurant Group. He made sushi at Umami Moto, for example, and introduced barbecue dishes at the former Mi-key's restaurant and bar.

Before taking the leap into starting his own operation, Alston also served as an executive chef at Marquette University. He said he knew he could work in a corporate position that would be more lucrative, but he “chose to take the less money, because I knew that was the area I wanted to succeed.

When the opportunity came around to open at the food hall, he decided to follow his passion by serving barbecue. Heaven's Table was a newcomer to Milwaukee’s restaurant scene when the food hall opened last December at 2238 N. Farwell Ave.

So far, he said, the business has worked out well. On the first day, he said, his line was out the door.

“I knew once I was able to expose it to people, they would love it,” he said.

Alston said he sees a gap in the market when it comes to the food on his menu. The dishes at Heaven’s Table are prepared using methods from Texas, he said.

“The less you put on meat, the more the meat stands out,” he said. “It’s all about not covering up flavor.”

The business offers just one barbecue sauce, scratch-made with a plum base, and Alston said it is offered on the side as a complement to the meat.

Now that Alston has seen success with his concept both as a food vendor and a caterer, he said he is preparing to expand. His plan is to have a stand-alone location in Milwaukee that will serve as a base for Heaven’s Table, then add restaurants in cities like Madison and Green Bay.

“We want it to be a destination when people come to Wisconsin,” he said.