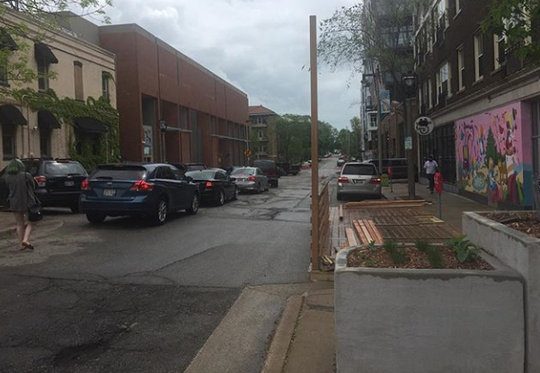 You can read the full article from Milwaukee Business Journal here

Commercial streets on the east side and other Milwaukee neighborhoods could close temporarily to create more outdoor dining space under a plan that won preliminary city approval Wednesday.

That would help restaurants, hit hard by the coronavirus pandemic, to expand outdoor space and serve more customers while still social distancing.

The pilot Active Streets for Businesses Program would suspend code and permit requirements to allow expedited city approval for restaurants to use streets and sidewalks for outdoor dining. It also would waive fees for those businesses.

The program, to run through Nov. 15, was recommended for approval on a 5-0 vote by the Common Council's Public Works Committee. It will have a council vote on June 16, with the Public Safety and Health Committee reviewing it on Thursday.

The proposal, similar to programs in other U.S. cities, was introduced by Ald. Marina Dimitrijevic, whose district includes Bay View.

It would help restaurants that have been waiting for months to reopen, she told committee members.

"I hope this is something we can move quickly on. Summer is here already," Dimitrijevic said.

"This is good stuff. This will help businesses," said Ald. Mark Borkowski. His district borders Greenfield, where restaurants are operating.

Milwaukee restaurants will be allowed to reopen once the city Health Department determines the community is meeting public health measures tied to the COVID-19 pandemic.

As in other communities, restaurants will initially be limited to 25% of their capacity to allow social distancing.

That adds up to a need for more outdoor space, say the proposal's supporters.

Along with sidewalks, outdoor seating could be provided through the city's parklet program. A parklet replaces street parking spaces in front of a restaurant with seasonal outdoor seating.

The specific locations haven't yet been determined. Any street closings would require additional city approvals.

But the East Side Business Improvement District has suggested two sites: part of East Ivanhoe Place between Farwell and Prospect avenues, and North Murray Avenue, between North and Thomas avenues.

The program requires restaurateurs to create barriers to block traffic. Also, it is restricted to streets with up to 25 miles per hour speed limits.

The program's many conditions could discourage a lot of restaurants from using it, said Ald. Robert Bauman, whose district includes downtown.

However, the program could later be adjusted to allow higher capacity depending on the Health Department's continuing assessment of the pandemic, said Public Works Commissioner Jeff Polenske.

Bauman and Borowski both said the Health Department should immediately allow restaurants to reopen.

Bauman said it was pointless to continue the restaurant closings given the number of communities that have reopened after the Wisconsin Supreme Court on May 13 tossed out Gov. Tony Evers' stay-at-home order.

"When my neighbors can drive to Wauwatosa, catch an infection and bring it back...who are we protecting?" Bauman said.

"All we're doing now is punishing businesses that have the misfortune of being in the city of Milwaukee," he said.

The Active Streets for Businesses Program is supported by neighborhood business groups, including the Milwaukee Downtown Business Improvement District.

"Our businesses are struggling not only downtown but citywide," said Beth Weirick, district chief executive officer. "We need to put people back to work."