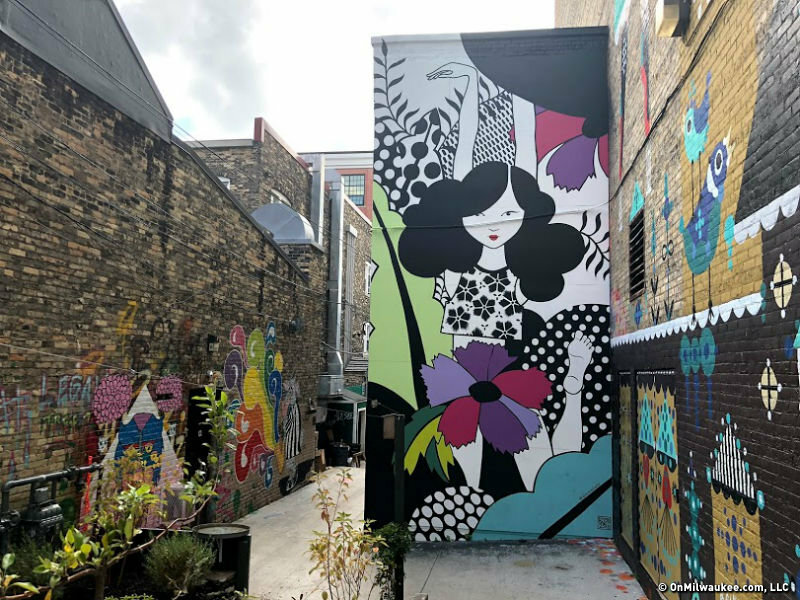 Black Cat Alley will get three new murals this month

More than 100 artists entered a competition to add murals to the East Side's Black Cat Alley this month and a community jury selected a pair of Milwaukee artists and another from Stevens Point to paint new works in the city's best permanent outdoor art gallery.

Yuly Catalina Bayona Pineda and Adjua Nsoroma, of Milwaukee, and Stephon Freeman, of Stevens Point, will add their murals in the coming weeks, joining another new mural painted earlier this year by Denver's DETOUR (aka Thomas Evans), while he was in town to paint a giant mural in West Allis.

DETOUR's mural in the alley is a portrait of musician Lex Allen.

The public call for artists opened to Wisconsin residents 18 and over in August, with special consideration given to BIPOC, LGBTQ+, and women artists.

Artists' fees and materials for the new murals are being funded by three grants awarded to the East Side BID in 2020: The Herzfeld Grant, a grant from the Heil Family Foundation and a Community Improvement Project (CIP) matching grant from the City of Milwaukee.

Created in 2016, Black Cat Alley – running north/south between Kenilworth and Ivanhoe Places, and Prospect and Farwell Avenues – is managed by Wallpapered City and owned by the East Side BID. It is free and open to the public 24/7, all year long. It draws more than 10,000 people each year.

Murals painted there are semi-permanent, remaining on view for three to five years. New murals have been added nearly every year since the gallery opened.

"Black Cat Alley is such an important cultural asset in the city of Milwaukee," says East Side BID Director Elizabeth Brodek. "We know that it's important to keep adding to it, to keep it fresh, so that it will stay relevant and exciting to re-visit."

The artists are expected to begin work on the murals soon after Labor Day weekend. Visitors are invited to watch.

"So it's so great to add new murals to the collection for the four-year anniversary, and just in time – again! – or Doors Open (which is virtual this year). We are so proud to be giving jobs to artists, and to be showcasing the talents of local artists in such an iconic space."