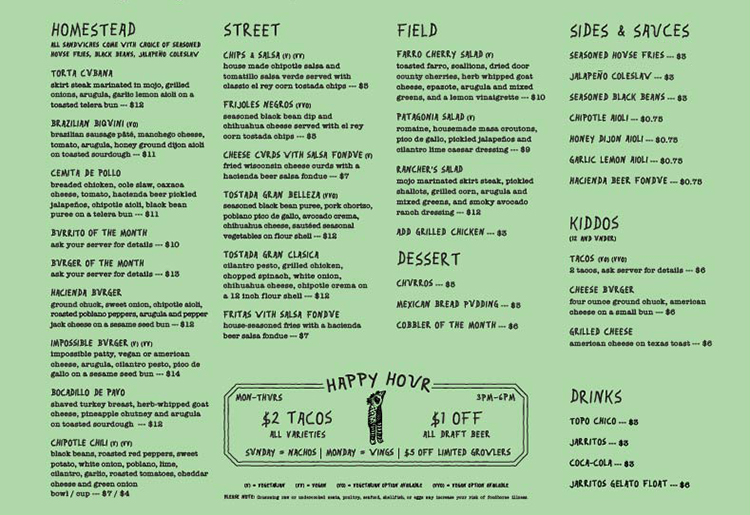 You can read the full article from Milwaukee Record here

Since opening in the former site of G-Daddy’s BBC in June, Hacienda Beer Co. has been a crucial part of North Avenue’s ongoing resurgence. The young taproom and restaurant has quickly made a name for itself in Milwaukee with consistently good small batch beers, a steady stream of live music, and food offerings that are as tasty as they are eclectic. With fall now firmly here and the instant East Side staple’s first full year on the horizon, Hacienda has decided to make some changes.

Beginning today, Hacienda will serve a significantly overhauled dinner menu. While early favorites like the Torta Cubana, Cemita, and Beer Cheese Fries survived the cut, the vast majority of menu items were either replaced or have been improved upon. Starting Monday evening, Hacienda will offer a trio of new salads, an ever-changing burrito of the month and burger of the month, and will expand its tostada offerings. Those are just a few of the adjustments to the dinner menu.

Additionally, the taproom will roll out a new brunch menu starting Saturday, November 9. The new menu will offer an expanded selection that includes a breakfast burrito, two types of Benedict, as well as new takes on classic brunch fare such as East Side Hash as well as a standard egg and bacon breakfast. Another notable addition—which will come into play during brunch and beyond—is a new line of coffee and espresso. Hacienda Coffee is roasted by hand in Door County and is in a variety of in-house options (including one type on draft) and a selection of items that can be ordered to-go.